"When you get to the end of your rope, tie a knot, and hang on."
-by President Franklin D. Roosevelt MarketingCharts recently took a close look at some changes on Facebook that might be making a huge impact on your social media marketing:

In January 2018, Facebook announced changes to its algorithm with an expressed intention (per their press release) to “prioritize posts that spark conversation and meaningful interaction between people.”

These changes, which made brand and publisher-owned Facebook pages less visible in consumers news feeds, have had a significantly adverse effect on publishers, according to data published by Parse.ly.

On average, publishers in Parse.ly’s network suffered a 28 percent overall decrease in traffic from Facebook during 2018 compared to the previous year.

Have you been hit by the changes? Do you know which two categories have been least affected by the changes? Find out that and get all the important details in the full MarketingCharts article.

- Special thanks to MarketingCharts

Include Pre-built FocalPoint Lead Generation Ads in Your Newsletter 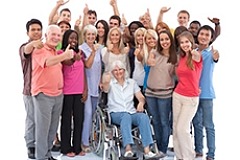 How to Manage a Multigenerational Workforce